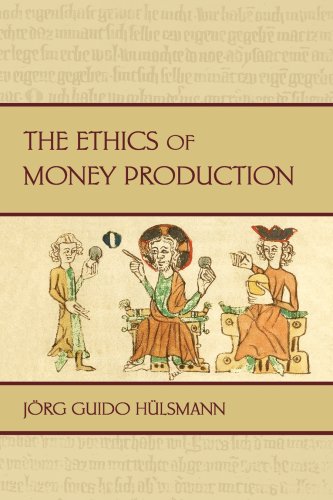 The Ethics of Money Production
by Jorg Guido Hulsmann

Description:
This pioneering work is the first full study of a critically important issue today: the ethics of money production. The thesis is that a government monopoly on money production and management has no ethical or economic grounding at all. Legal tender laws, bailout guarantees, tax-backed deposit insurance, and the entire apparatus that sustains national monetary systems, has been wholly unjustified.

The Future of Money in the Information Age
by James A. Dorn (ed.) - Cato Institute
The essays in this book consider the implications of the information revolution for financial innovation and the future of money; the regulatory climate; the impact of e-money on taxation and monetary policy; the problem of maintaining privacy; etc.
(2333 views)

The Theory of Money and Credit
by Ludwig von Mises - Yale University Press
Mises shows how money had its origin in the market, and how its value is based on its usefulness as a commodity in exchange. Mises presents the case for sound money with no inflation, and presents the beginnings of a full-scale business cycle theory.
(12224 views)

The Tragedy of the Euro
by Philipp Bagus - Ludwig von Mises Institute
Professor Bagus explains the background to the idea of European unity and its heritage of sound money. He explains that the Euro is not what the older liberals had hoped for but instead is a politically managed money that is destined for failure.
(4525 views)