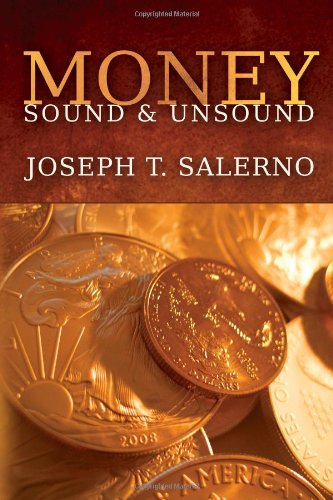 Description:
Ludwig von Mises said that there can never be too much of a good theory. Salerno proves it in this sweeping and nearly comprehensive book on applied Austrian monetary theory. He uses the Mises/Rothbard theory of money to reinterpret historical episodes, reevaluate the history of thought, closely examine the Federal Reserve policy, seek out cause and effect in business cycles, provide a new understanding of war and social unrest, and clarify the relationship between the state and the central bank.

Fundamentals of Monetary Policy in the Euro Area
by Dieter Gerdesmeier - Bookboon
This book attempts to inform the reader about the analytical background and institutional setting of euro area monetary policy. The theory and practice of monetary policy are explained in detail and illustrated by a number of real world examples.
(7952 views)

Money, Bank Credit, and Economic Cycles
by Jesús Huerta de Soto - Ludwig von Mises Institute
Author has made history with this exciting treatise that the market can fully manage the money and banking sector, without inflation, without business cycles, and without the economic instability that has characterized the age of government control.
(15870 views)

The Tragedy of the Euro
by Philipp Bagus - Ludwig von Mises Institute
Professor Bagus explains the background to the idea of European unity and its heritage of sound money. He explains that the Euro is not what the older liberals had hoped for but instead is a politically managed money that is destined for failure.
(6483 views)

Money and Man: A Survey of Monetary Experience
by Elgin Groseclose - University of Oklahoma Press
A survey of the history of money. This book makes abundantly clear that what we are experiencing today is the exact same situation that has been inflicted over and over again throughout history on the most advanced and powerful civilizations.
(9854 views)