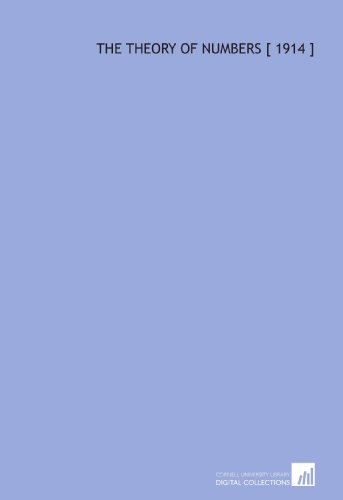 The Theory of Numbers
by R. D. Carmichael

Description:
The purpose of this little book is to give the reader a convenient introduction to the theory of numbers, one of the most extensive and most elegant disciplines in the whole body of mathematics. The treatment throughout is made as brief as is possible consistent with clearness and is confined entirely to fundamental matters.

An Introduction to the Theory of Numbers
by Leo Moser - The Trillia Group
The book on elementary number theory: compositions and partitions, arithmetic functions, distribution of primes, irrational numbers, congruences, Diophantine equations; combinatorial number theory, and geometry of numbers.
(17010 views)

A Friendly Introduction to Number Theory
by Joseph H. Silverman - Pearson Education, Inc.
Introductory undergraduate text designed to entice non-math majors into learning some mathematics, while at the same time teaching them how to think mathematically. The exposition is informal, with a wealth of examples that are analyzed for patterns.
(9688 views)

Topology of Numbers
by Allen Hatcher - Cornell University
An introductory textbook on elementary number theory from a geometric point of view, as opposed to the strictly algebraic approach. A fair amount of the book is devoted to studying Conway's topographs associated to quadratic forms in two variables.
(6063 views)

Theoretic Arithmetic
by Thomas Taylor, A. J. Valpy
The substance of all that has been written on this subject by Nicomachus, Iamblichus, and Boetius, together with some particulars respecting perfect, amicable, and other numbers, which are not to be found in the writings of modern mathematicians.
(9879 views)