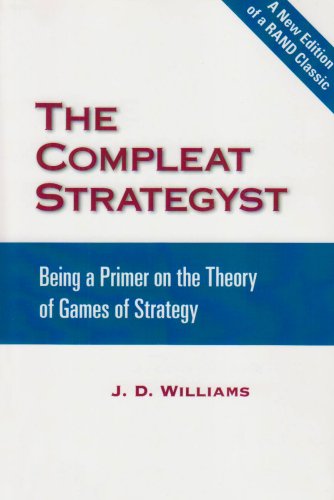 The Compleat Strategyst: Being a Primer on the Theory of Games of Strategy
by John D. Williams

Description:
When The Compleat Strategyst was originally published in 1954, game theory was an esoteric and mysterious subject, familiar only to specialized researchers, particularly in the military. Its popularity today can be traced at least in part to this book, which popularized the subject for amateurs, professionals, and students throughout the world.

The Victory At Sea
by William Sowden Sims - John Murray
An authoritative, summarized accounting with illustrations and maps of U.S. naval operations during the First World War. It is a 'must' for any naval historian, research scholar, coalition military tactician, including naval learning centers.
(7070 views)

Some principles of maritime strategy
by Julian Stafford Corbett - Naval & Military Press
The book covers the theory of naval war, command of the sea, the constitution of fleets, concentration and dispersal of force, typical forms of naval operations, methods of securing and disputing command, methods of exercising command, and more.
(11439 views)

Collective Defense or Strategic Independence
by Ted Galen Carpenter (ed.) - Cato Institute
The doctrine of collective defense has governed U.S. foreign policy for more than four decades and has enjoyed public consensus. But now prominent figures on both the left and the right are advocating a new look at America's global commitments.
(3340 views)

The Battle Behind the Wire: U.S. Prisoner and Detainee Operations from World War II to Iraq
by Cheryl Benard, et al. - Rand Publishing
Determining how to gain knowledge from, hold, question, and release captured adversaries can be an important component of military strategy. This monograph finds parallels in U.S. prisoner operations in World War II, Korea, Vietnam, and Iraq.
(6962 views)