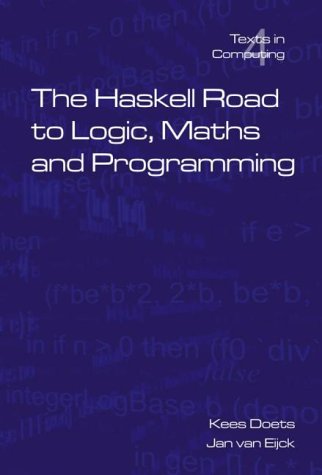 Description:
The purpose of this book is to teach logic and mathematical reasoning in practice, and to connect logical reasoning with computer programming. The programming language that will be our tool for this is Haskell, a member of the Lisp family.

Lectures on Linear Logic
by A. S. Troelstra - CSLI
This text deals with logical formalism, cut-elimination, the embedding of intuitionistic logic in classical linear logic, proofnets for the multiplicative fragment and the algorithmic interpretation of cut-elimination in proofnets.
(8971 views)

A Concise Introduction to Mathematical Logic
by Wolfgang Rautenberg - Springer
A well-written introduction to the beautiful and coherent subject. It contains classical material such as logical calculi, beginnings of model theory, and Goedel's incompleteness theorems, as well as some topics motivated by applications.
(9959 views)

Introduction to Mathematical Philosophy
by Bertrand Russell - University of Massachusetts Amherst
A very accessible mathematical classic. It sets forth in elementary form the logical definition of number, the analysis of the notion of order, the modern doctrine of the infinite, and the theory of descriptions and classes as symbolic fictions.
(11366 views)

Logic for Computer Science
- Wikibooks
This book provides a survey of mathematical logic and its various applications. After covering basic material of propositional logic and first-order logic, the course presents the foundations of finite model theory and descriptive complexity.
(6768 views)