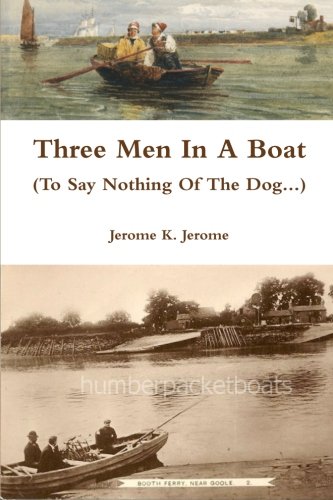 Three Men in a Boat
by Jerome K. Jerome

Description:
The story of three Englishman who pile into a boat with food, clothes, and a fox terrier named Montmorency and set off on the Thames to see the English countryside. Jerome Klapka Jerome was an English writer and humorist, best known for the humorous travelogue Three Men in a Boat, which is today considered one of the funniest books in the English language.

How to be Happy Though Married
by Edward John Hardy - T Fisher Unwin
We strongly recommend this book as one of the best of wedding presents. It is a complete handbook to an earthly Paradise, and its author may be regarded as the Murray of Matrimony and the Baedeker of Bliss. Admirably written volume.
(11567 views)

The Diary of a Nobody
by George Grossmith, Weedon Grossmith - A. A. Knopf
The diary of a clerk in London, an old fashioned humourous book. It documents in hilarious detail the everyday life of the lower middle class during the Great Victorian age. A classic masterpiece with some nice subtle humor.
(15495 views)

Bagels, Barry Bonds, and Rotten Politicians
by Burton S. Blumert - Ludwig von Mises Institute
Burton Blumert is an entrepreneur who knows not only all that there is to know about precious metals but also about politics and economics. He offers his wide-ranging insights in this funny, charming, and also learned collection of essays.
(18535 views)

The Devil's Dictionary
by Ambrose Bierce - World Pub. Co
Satiric lexicon by Ambrose Bierce, first compiled as The Cynic's Word Book in 1906. The barbed definitions that Bierce began publishing in a weekly journal he edited in San Francisco, brought this 19th-century stock form to a new level of artistry.
(15925 views)