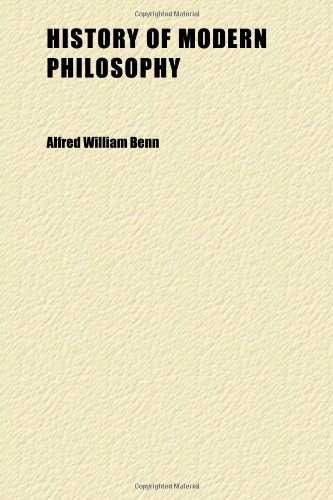 Description:
The author was an agnostic and an honorary associate of the Rationalist Press Association. From the table of contents: The Philosophical Renaissance; The Metaphysicians; The Theorists of Knowledge; The German Idealists; The Humanists of the Nineteenth Century.

Initiation into Philosophy
by Emile Faguet - G. P. Putnam's sons
A fantastic look at the whole history of Philosophy from ancient times up to the beginnings of modern thinking. Covers all the major philosophers and philosophical theories, as well as the historical interplay between religion and philosophy.
(819 views)

Arabic Thought and Its Place in History
by De Lacy O'Leary - Kegan Paul and Company
A study of the mutual influence of Arabic and Western worlds during the Middle Ages. It traces the transmission of Greek philosophy and science to the Islamic cultures. The book presents a fascinating portrait of medieval Muslim thought.
(16213 views)

The Greek Philosophers
by Alfred William Benn - Kegan Paul, Trench, & co.
The appearance of a new idea can only be made intelligible by tracing the previous tendencies. The history of philosophy has itself a philosophy which requires that we go beyond particular phenomena and view them as related parts of a single system.
(3673 views)