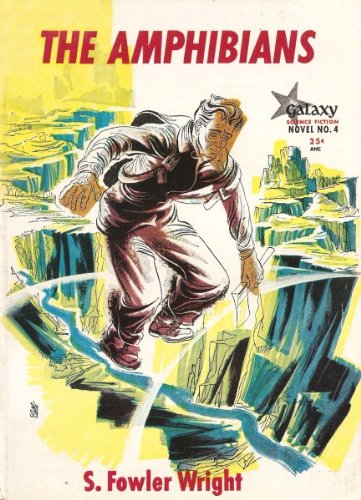 The Amphibians
by S. Fowler Wright

Description:
I looked round, and saw nothing, --upward, and the three great stars of Orion's belt showed through the fog, and the upper part of the constellation; and other stars were in the central heavens; but lower down the mist hid them. If I were indeed transported to some remote and future time, at least the same stars were there, without fundamental change, even of their positions in the heavens.

Virgin Planet
by Poul Anderson - The Galaxy Publishing Corporation
He is Davis Bertram, a space-explorer. But how can he convince them he really is a man? Their legends have built Men into gods. Trying to be worthy of the Coming, the women imitate masculine virtues. They are warlike, ambitious, ruthless.
(3689 views)

Fear
by L. Ron Hubbard - Gerard Arthus
Professor James Lowry doesn't believe in ghosts, the supernatural, the surreal, or any type of dark fantasy. Not until a gentle spring evening when his hat disappeared, and suddenly he couldn't remember the last four hours of his life.
(5051 views)

The Humanoids
by Jack Williamson - Gerard Arthus
A brilliant scientist creates the humanoids - sleek black androids programmed to serve humanity. But are they perfect servants - or perfect masters? Slowly the humanoids spread throughout the galaxy, threatening to stifle all human endeavor.
(4637 views)

Flesh
by Philip Jose Farmer - The Galaxy Publishing Corporation
Space Commander Stagg explored the galaxies for 800 years. Upon his return, the hero Stagg is made the centerpiece of an incredible public ritual, one that will repeatedly take him to the heights of ecstasy and the depths of hell.
(3236 views)