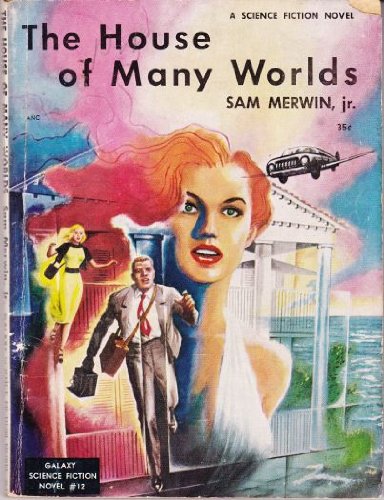 The House Of Many Worlds
by Sam Merwin, Jr.

Description:
In this classic science fiction novel the New York Times called 'a fast-moving adventure, told with engaging humor', reporter Elspeth Marriner's nose for news leads her into a world of trouble. Make that, in worlds of trouble ...

Sinister Barrier
by Eric Frank Russell - World Editions
This story by Eric Frank Russell was first serialized in 1930, then published in book form in 1943. The story of a future where the human race is owned and operated by the invisible Vitons, parasites that feed on human pain and anguish.
(3709 views)

Pebble in the Sky
by Isaac Asimov - The Galaxy Publishing Corporation
One moment Joseph Schwartz is a happily retired tailor in Chicago, 1949. The next he's a helpless stranger on Earth during the heyday of the first Galactic Empire. Earth, as he soon learns, is a backwater, just a pebble in the sky, despised by all...
(3987 views)

The City in the Sea
by Wilson Tucker - Gerard Arthus
This is the story of an expedition, a strange and exciting expedition of one man and an army of women. He had come into the land of the women suddenly and without warning. Tall, bronzed, muscular, he stood out among their pale skins and meek spirits.
(3812 views)