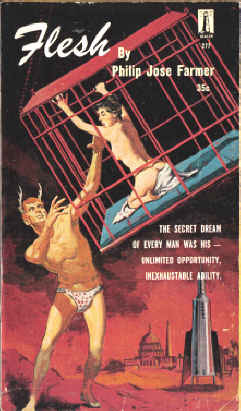 Description:
Space Commander Stagg explored the galaxies for 800 years. Upon his return, the hero Stagg is made the centerpiece of an incredible public ritual, one that will repeatedly take him to the heights of ecstasy and the depths of hell.

The Mating Cry
by A. E. van Vogt - The Galaxy Publishing Corporation
He was still in the coffin, but a cool draft of fresh air was blowing across his face. In the blackness, Tannahill put out his hand. He touched cushiony satin, but after a minute the air was wafting as coolly as ever into his nostrils...
(3196 views)

The Last Spaceship
by Murray Leinster - The Galaxy Publishing Corporation
Kim Rendall will not yield to the tyranny of the power-madrulers of Alphin III. Branded an outlaw, he is in danger of psychological torture worse than death from the Disiplinary Circuit. His one hope lies in the Starshine, an outmoded spaceship.
(4183 views)

The House Of Many Worlds
by Sam Merwin, Jr. - The Galaxy Publishing Corporation
In this classic science fiction novel the New York Times called 'a fast-moving adventure, told with engaging humor', reporter Elspeth Marriner's nose for news leads her into a world of trouble. Make that, in worlds of trouble ...
(3027 views)