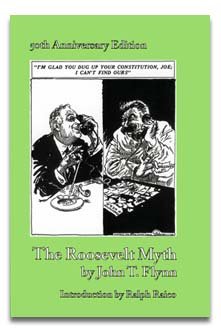 The Roosevelt Myth
by John Flynn

Description:
Franklin D. Roosevelt is the most sainted president of the 20th century. You have to look far and wide to discover the truth about his character and policies. But as John T. Flynn noted in this landmark 1948 volume, FDR actually prolonged the Great Depression and deliberately dragged the country into a war that seriously compromised American liberties.

The God of the Machine
by Isabel Paterson - G.P. Putnam's Sons
The author presents an original theory of history and a bold defense of individualism as the source of moral and political progress. When it was published, her book placed her in the vanguard of the free-enterprise movement now sweeping the world.
(18109 views)

Introductory American History
by Elbert J. Benton, Henry E. Bourne - Project Gutenberg
This is the introductory part of a course in American history embodying the plan of study recommended by the Committee of Eight of the American Historical Association. The plan calls for a continuous course running through grades six seven and eight.
(9787 views)

Battles of the Civil War
by Thomas Elbert Vineyard - Spencer, W. Va.
In all history of this American Republic, there was no conflict that was so terrible as our Civil war. I have endeavored in this book to describe in detail the chief points that were enacted on the most important battlefields of that War.
(9834 views)

Red Scare: FBI and the Origins of Anticommunism in the United States
by Regin Schmidt - Museum Tusculanum Press
This book breaks new ground by tracing the roots of the FBI's political surveillance to the involvement of the Bureau's predecessor, the Bureau of Investigation in the nation's first period of communist-hunting, the 'Red Scare' after World War I.
(4085 views)