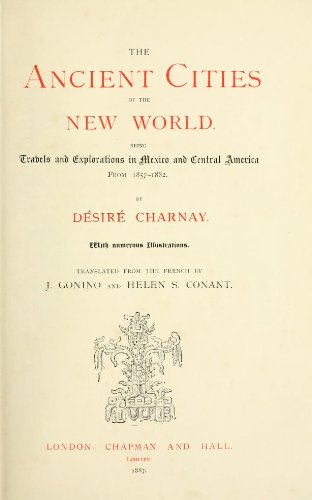 The Ancient Cities of the New World
by Désiré Charnay

Description:
My wish has been so to write as to be easily understood by all; to this end I have given my book the dual form of a journal as well as a scientific account: in it I recount the history of a civilisation which has long passed away, which is hardly known, or rather which has been systematically misunderstood and misrepresented. My explorations led me to the uplands of Mexico, the first establishments of the civilising race, and enabled me to trace the Toltecs step by step to their highest development in the various regions of Central America.

From Rome to Byzantium
by Tom Green - ManyBooks
Provides a detailed overview of trading activity in the Roman and Byzantine Mediterranean, grounded in recent archaeological research. It is argued that free trade played a significant role in the nature of trading in Classical and Late Antiquity.
(8957 views)

The Ancient East
by D. G. Hogarth - H. Holt
The area we shall survey in 1000 B.C. and re-survey at intervals, contains Western Asia bounded eastwards by a line drawn from the Persian Gulf to the Caspian Sea. This area is marked off by seas on three sides and by desert on the fourth side.
(17658 views)

Alexander the Great
by Jacob Abbott - Harper & Brothers
Alexander the Great created one of the largest empires in ancient history. The cultural impact of his conquests lasted for centuries. Alexander is is remembered for his tactical ability and for spreading Greek civilization into the East.
(13896 views)

A Handbook of Greek Constitutional History
by A.H.J. Greenidge - MacMillan
Lucid and highly readable overview of a difficult and little understood aspect of Greek history: its public law, not just how it was structured but how it behaved in action. Perfect for university students and amateur historians.
(15405 views)