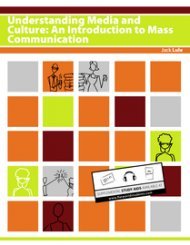 Understanding Media and Culture: An Introduction to Mass Communication
by Jack Lule

Description:
The text will support an engaging and interesting course experience for students that will not only show them the powerful social, political and economic forces will affect the future of media technology, but will challenge students to do their part in shaping that future.

Media Piracy in Emerging Economies
by Joe Karaganis - SSRC Books
An independent study of music, film and software piracy in emerging economies, with a focus on Brazil, India, Russia, etc. The report argues that the problem of piracy is better conceived as a failure of affordable access to media in legal markets.
(5853 views)

Media and Cultural Theory
by Stephen Hill, Bevis Fenner - BookBoon
This is an ideal guidebook for undergraduates studying a range of Media and Cultural Studies courses. Alongside more traditional forms like film, television and music, the book also makes reference to Facebook, YouTube and MySpace.
(9555 views)

Audiovisions : Cinema and Television as Entr'actes in History
by Siegfried Zielinski - Amsterdam University Press
The book reconstructs the genesis of cinema and television as historically relative cultural forms, focussing on the interaction between the apparatus and its uses. It is also a plea for 'staying power' in studies of cultural technology of film.
(3353 views)