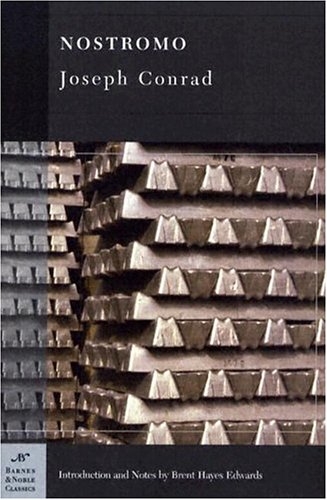 Description:
One of the greatest novels of the twentieth century, Joseph Conrad’s Nostromo is an immensely exciting tale of love, revolution, and politics set in the mythical South American country of Costaguana during the 1890s. Ten years after his father is murdered by a brutal dictator, Englishman Charles Gould arrives in Costaguana to reopen the family silver mine. But instead of ushering in a shining era of prosperity and progress, the return of the silver engenders a new cycle of violence as Costaguana erupts in civil war, initiated by rival warlords determined to seize the mine and its riches. In desperation, Gould turns to the only man who can save the mine’s treasure—Nostromo, the incorruptible head of the local dockworkers, who protects the silver from rebel forces by taking it out to sea. But disaster strikes, burdening Nostromo with a terrible secret that forever alters the fate of everyone involved with the mine. A stunning monument to futility, Nostromo reveals how honor, idealism, and loyalty are inadequate defenses against the inexorable assault of corruption and evil.

Lord Jim: a romance
by Joseph Conrad - Doubleday
A story of a young, idealistic Englishman who is disgraced by a single act of cowardice while serving as an officer on a merchant-ship sailing from an eastern port. His life is ruined: an isolated scandal has assumed horrifying proportions.
(7705 views)

The Nigger of the Narcissus
by Joseph Conrad - Doubleday, Page & Co
This short novel is a rollicking sea adventure. Those who love the picaresque voyages so common in nineteenth century literature will hardly find a better one; this has all the excitement, suspense, and drama one could want.
(6713 views)

The Rover
by Joseph Conrad - The Ryerson Press
The story is about Peyrol's attempt at withdrawal from an action- and blood-filled life; his involvement with the pariahs of Escampobar; the struggle for his identity and allegiance, which is resolved in his last voyage. A historical Romance.
(6790 views)