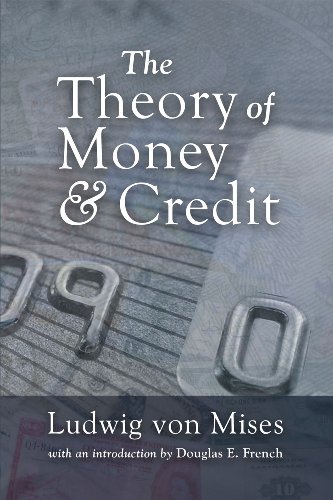 The Theory of Money and Credit
by Ludwig von Mises

Description:
This classic treatise on monetary theory remains the definitive integration of microeconomics and macroeconomics. First published in 1912-and remaining in print since that time-it catapulted Mises into the ranks of Europe's most respected economists. Rothbard aptly describes it as "the best book on money ever written," economists have yet to absorb all its lessons. Mises shows how money had its origin in the market, and how its value is based on its usefulness as a commodity in exchange. Mises presents the case for sound money with no inflation, and presents the beginnings of a full-scale business cycle theory.

The Case Against the Fed
by Murray N. Rothbard - Ludwig Von Mises Institute
The author presents the most powerful case against the American central bank ever written. This work begins with a mini-treatment of money and banking theory, and then plunges right in with the real history of the Federal Reserve System.
(14400 views)

The Case for Gold
by Ron Paul - Ludwig von Mises Institute
The book covers the history of gold in the US, explains that its breakdown was caused by governments, and explains the merit of having sound money: prices reflect market realities, government stays in check, and the people retain their freedom.
(14520 views)

The Ethics of Money Production
by Jorg Guido Hulsmann - Ludwig von Mises Institute
This pioneering work is the first full study of a critically important issue today: the ethics of money production. The thesis is that a government monopoly on money production and management has no ethical or economic grounding at all.
(10579 views)

The Future of Money in the Information Age
by James A. Dorn (ed.) - Cato Institute
The essays in this book consider the implications of the information revolution for financial innovation and the future of money; the regulatory climate; the impact of e-money on taxation and monetary policy; the problem of maintaining privacy; etc.
(4681 views)