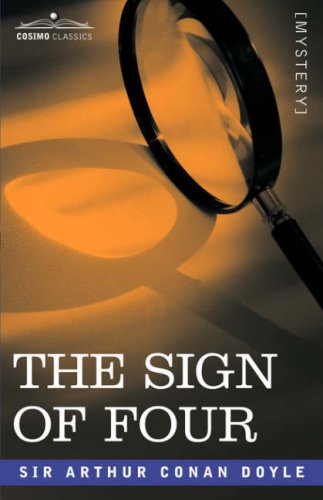 The Sign of the Four
by Arthur Conan Doyle

Description:
A classic of detective fiction and a forerunner of this now-ubiquitous genre. The story has everything - a beautiful damsel in distress, mysterious disappearances, a murder, a strange and lustrous pearl, a peculiar map, four desperate villains, an exotic treasure and, above it all, smiling superiorly as he moves with sure-footed confidence through the morass of conflicting clues, the inimitable Sherlock Holmes, investigator extraordinaire.

Sir Nigel
by Arthur Conan Doyle - W. Briggs
In this epic novel squire Nigel Loring sets out to serve King Edward at the start of the Hundred Years' War. As battles wage between the French and English armies, Nigel attempts to earn his knighthood .. and to win the heart of the woman he loves.
(5704 views)

Memoirs of Sherlock Holmes
by Sir Arthur Conan Doyle - A. Burt
Sir Arthur Conan Doyle's second story collection about the greatest detective, containing such puzzles as The Greek Interpreter, The Musgrave Ritual, Silver Blaze and The Final Adventure, the struggle between Holmes and the evil Professor Moriarty.
(10586 views)

Through the Magic Door
by Arthur Conan Doyle - The McClure Company
This work is Conan Doyle's casually eloquent tour of the cherished books on his own shelves. As the author surveys the contents of his bookroom, each book prompts an essay in appreciation, affectionate reflections both personal and literary.
(5897 views)

The White Company
by Arthur Conan Doyle - Feedbooks
This novel is a historical adventure set during the Hundred Years' War. The story follows a young man as he leaves the shelter of an abbey in England and becomes involved with Edward, the Black Prince's campaign in Spain.
(9403 views)