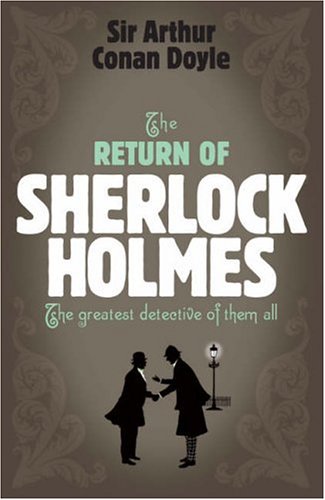 The Return of Sherlock Holmes
by Sir Arthur Conan Doyle

Description:
Resurrected after his apparent death three years earlier, the older and wiser Holmes of these stories shows a willingness to let his conscience prevail over the letter of the law. In The Empty House, within hours of Dr. Watson bumping into an aged bookseller, he and Holmes are back together after a three year hiatus, tracking a master criminal to their own front door. An obvious motive and copious clues point a murderous finger at Holmes own client in The Norwood Builder. The Dancing Men jettisons Holmes into the investigation of what had previously appeared to be merely childish scribbles, and in the end it is Holmes' own pistol clapped against the head of the malefactor. The Solitary Cyclist stalking Miss Violet Smith sends Holmes and Watson down a murky trail of passion and crime. In this first volume of The Return of Sherlock Holmes, the fearsome duo of Watson and Holmes are at the top of their form.

Sir Nigel
by Arthur Conan Doyle - W. Briggs
In this epic novel squire Nigel Loring sets out to serve King Edward at the start of the Hundred Years' War. As battles wage between the French and English armies, Nigel attempts to earn his knighthood .. and to win the heart of the woman he loves.
(6025 views)

The Disintegration Machine
by Arthur Conan Doyle - Feedbooks
Professor Challenger is arguing with people who are calling him on the telephone when his friend Malone enters and requests Challenger accompany him to inspect the discovery of Theodore Nemor, who invented a machine capable of disintegrating objects.
(5650 views)