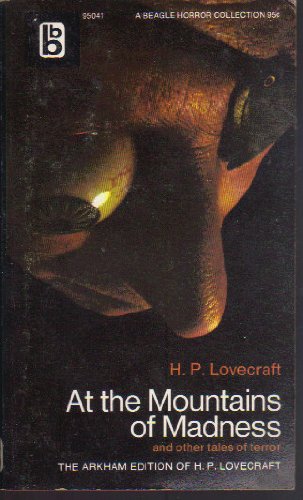 At the Mountains of Madness
by H.P. Lovecraft

Description:
On an expedition to Antarctica, Professor William Dyer and his colleagues discover the remains of ancient half-vegetable, half-animal life-forms. The extremely early date in the geological strata is surprising because of the highly-evolved features found in these previously unkown life-forms. Through a series of dark revelations, violent episodes, and misunderstandings, the group learns of Earth's secret history and legacy.

The Shunned House
by H.P. Lovecraft - Weird Tales
Almost all who lived in that house passed away after becoming sick. This has been going for over one hundred years. Dr. Whipple decided to find out why and spend a night with his uncle in that house. What will happen is left up for you to explore.
(5523 views)

Through the Gates of the Silver Key
by H.P. Lovecraft - ManyBooks
H.P. Lovecraft's classic occult tale of horror. At a gathering to decide the fate of Randolph Carter's estate which has been held in trust since his disappearance the mysterious Swami Chandraputra tells Carter's acquaintances of his ultimate fate.
(6145 views)

The Outsider
by H. P. Lovecraft - Weird Tales
A short story about a mysterious individual who awakens to find himself completely alone and what happens when he attempts to make contact with others. The story combines fantasy and horror into an atmospheric, surrealistic, and nightmarish tale.
(7313 views)

The Shadow over Innsmouth
by H.P. Lovecraft
'The Shadow Over Innsmouth' is a short novel about a weird hybrid race of humans and creatures resembling a cross between a fish and a frog, which lives in the seaside village of Innsmouth. A dark, brooding story, typical of Lovecraft at his best.
(6262 views)