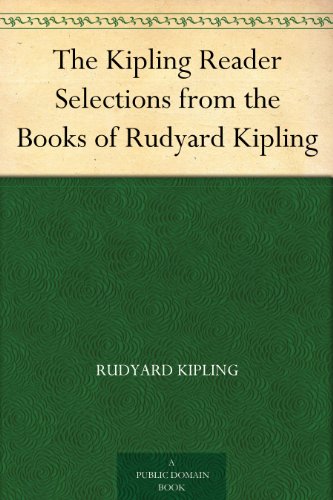 The Kipling Reader
by Rudyard Kipling

Description:
Selections from the books of Rudyard Kipling: Rikki-Tikki-Tavi, William the Conqueror, A Matter of Fact, Mowgli's Brothers, The Lost Legion, Namgay Doola, A Germ-Destroyer, Tods' Amendment, The Story of Muhammad Din, The Finances of the Gods, Moti Guj--Mutineer, etc.

Jungle Book
by Rudyard Kipling - HarperCollins
Mowgli's days are filled with danger and excitement. He learns about the jungle from the wise old bear, Baloo, and the great black panther, Bagheera. He is befriended by the faithful wolf, Gray Brother, and is carried off by the crafty Monkey-People.
(15136 views)

The Seven Seas
by Rudyard Kipling - D. Appleton
A bitter, disillusioned series of poems centred on Britain's role in colonialism and Empire building. With reverberating lyrics, Kipling writes of the ruthless means that were often employed to add nations to the Empire, and the subsequent effects.
(7211 views)

Kim
by Rudyard Kipling
Rudyard Kipling has been attacked for championing British imperialism and celebrated for satirizing it. Nowhere does he express his own ambivalence more strongly than in Kim, his rousing adventure novel of a young man of many allegiances.
(8221 views)