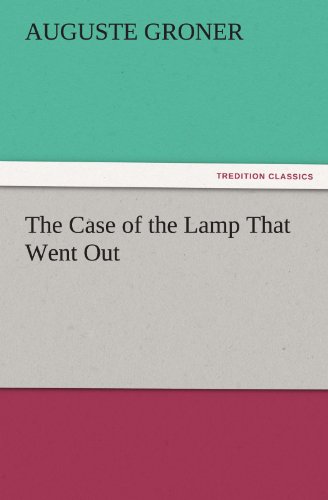 The Case of the Lamp That Went Out
by Auguste Groner

Description:
Joseph Muller, Secret Service detective of the Imperial Austrian police, is one of the great experts in his profession. In personality he differs greatly from other famous detectives. He has neither the impressive authority of Sherlock Holmes, nor the keen brilliancy of Monsieur Lecoq...

Ten Thousand Suspects
by Rayanda - RayandaArts
A hiker plunges to his death, a child is kidnapped and a man has his throat slashed to keep him from telling secrets that lure stolen art sleuth, Rane Lavita, and her pal, Chanlee, into the labyrinthine underbelly of the lucrative world of forgeries.
(7558 views)

Murder in Steeple Martin
by Lesley Cookman - Smashwords
First in a series of British murder mysteries featuring retired actress and sleuth, Libby Sarjeant. Artist and ex-actress Libby is busy directing a play for the opening of a new theatre in her village when one of her cast is found murdered.
(6966 views)

The Borough Treasurer
by J.S. Fletcher - Grosset & Dunlap
This is a quite readable and well-plotted murder mystery without the customary clever detective who puts it all together. Instead the plot unrolls before the reader as it happens, but not without a few surprises and interesting twists.
(6395 views)

Two For Rain
by K.J. Rivera - Smashwords
Self proclaimed private investigators Leah and Sebastian Reyes take off on a quest full of twists and turns to solve the mystery of a missing college student. They will encounter a range of dangerous suspects snared in centuries-old traditions ...
(6045 views)