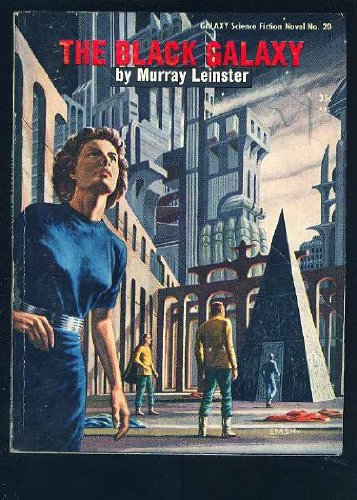 The Black Galaxy
by Murray Leinster

Description:
Rod wanted to have the first real spaceship capable of putting up a fight. He believed it might need to fight. But anyhow he was still in command of the construction of the space-ship now building and he'd command it when it took off from Earth. Maybe he could find more conclusive proof of the peril he believed in. Most likely, indeed, on the Moon. The central peak of Tycho would be the logical place to look for proof. If he could show a group of scientists that proof...

Pebble in the Sky
by Isaac Asimov - The Galaxy Publishing Corporation
One moment Joseph Schwartz is a happily retired tailor in Chicago, 1949. The next he's a helpless stranger on Earth during the heyday of the first Galactic Empire. Earth, as he soon learns, is a backwater, just a pebble in the sky, despised by all...
(3987 views)

Virgin Planet
by Poul Anderson - The Galaxy Publishing Corporation
He is Davis Bertram, a space-explorer. But how can he convince them he really is a man? Their legends have built Men into gods. Trying to be worthy of the Coming, the women imitate masculine virtues. They are warlike, ambitious, ruthless.
(3690 views)

The Last Spaceship
by Murray Leinster - The Galaxy Publishing Corporation
Kim Rendall will not yield to the tyranny of the power-madrulers of Alphin III. Branded an outlaw, he is in danger of psychological torture worse than death from the Disiplinary Circuit. His one hope lies in the Starshine, an outmoded spaceship.
(4197 views)