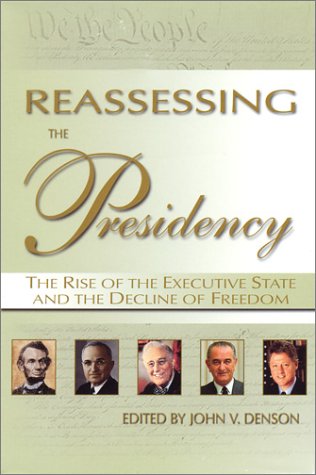 Reassessing the Presidency : The Rise of the Executive State and the Decline of Freedom
by John V. Denson

Description:
This book is the first full-scale revision of the official history of the U.S. executive state. It traces the progression of power exercised by American presidents from the early American Republican up to the eventual reality of the power-hungry Caesars which later appear as president in American history. Contributors examine the usual judgments of the historical profession to show the ugly side of supposed presidential greatness.

The God of the Machine
by Isabel Paterson - G.P. Putnam's Sons
The author presents an original theory of history and a bold defense of individualism as the source of moral and political progress. When it was published, her book placed her in the vanguard of the free-enterprise movement now sweeping the world.
(17873 views)

US History
- Wikibooks
The textbook covers everything that US history students study in high school or college. The contents: the history of colonial america, the early republic, antebellum america, the republic from 1877 to 1989, and from 1989 to the election 2008.
(14401 views)

Hero Stories from American History
by Francis K. Ball, Albert F. Blaisdell - The Athenaeum Press
This book is intended to be used as a supplementary historical reader for the pupils from twelve to fifteen years of age. It is also designed for collateral reading in connection with the study of a formal text-book on American history.
(8634 views)

Over the Edge: Remapping the American West
by V. J. Matsumoto, B. Allmendinger - University of California Press
From the Gold Rush to rush hour, the history of the American West is fraught with diverse, subversive, and at times downright eccentric elements. This provocative volume challenges traditional readings of western history and literature.
(12768 views)