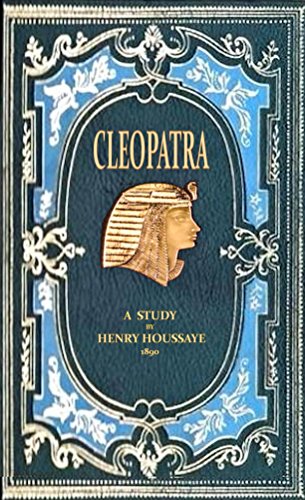 Cleopatra: A Study
by Henry Houssaye

Description:
For twenty years she preserved her throne and maintained the independence of Egypt. It was done by mere womanly means -- intrigue, gallantry, grace, and weakness which is also a grace. If her renown is immortal, it is because she is the heroine of the most dramatic love-story of antiquity.

Ancient Egypt
by George Rawlinson - T. Fisher Unwin
In shape Egypt is like a lily with a crooked stem. A broad blossom terminates it at its upper end; a button of a bud projects from the stalk a little below the blossom. The broad blossom is the Delta, extending a direct distance of 180 miles.
(7909 views)

Ancient Egypt
- Wikipedia
Ancient Egypt was an ancient civilization of Northeastern Africa. A new-found respect for antiquities in the early modern period led to the scientific investigation of Egyptian civilization and a greater appreciation of its cultural legacy.
(5299 views)

The Civilization of the Ancient Egyptians
by A. Bothwell Gosse - T. C. & E. C. Jack
The most notable quality of the Egyptian civilization is its permanent character. Instead of lasting only a few hundred years, it endures for thousands; in Egypt there appears to be no beginning, the civilization apparently starts mature.
(8365 views)

The Treasury of Ancient Egypt
by Arthur E. P. B. Weigall - W. Blackwood and sons
This volume contains twelve chapters written at various times and in various places each dealing with some subject drawn from the great treasury of Ancient Egypt. Sir Arthur Weigall was an English Egyptologist, journalist and author.
(11535 views)