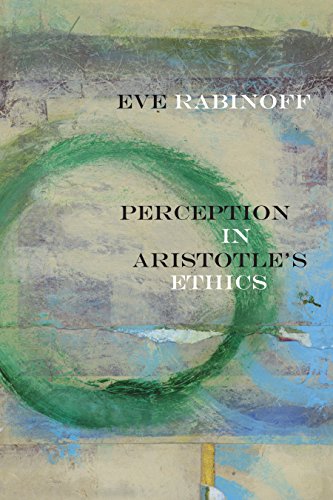 Description:
The book seeks to demonstrate that living an ethical life requires a mode of perception that is best called ethical perception. Specifically, drawing primarily on Aristotle’s accounts of perception and ethics in De anima and Nicomachean Ethics, Eve Rabinoff argues that the faculty of perception (aisthesis), which is often thought to be an entirely physical phenomenon, is informed by intellect and has an ethical dimension insofar as it involves the perception of particulars in their ethical significance, as things that are good or bad in themselves and as occasions to act.

A Treatise of Human Nature
by David Hume - Project Gutenberg
Useful far beyond the small circle of scholarly experts. The Treatise has a fair claim to be the most important philosophical text ever written in English. After more than 250 years, Hume is still at the front line of philosophical inquiry.
(13020 views)

Aristotle on the Goals and Exactness of Ethics
by Georgios Anagnostopoulos - University of California Press
The book offers the systematic critical examination of Aristotle's views on the exactness of ethics. The author gives form to Aristotle's belief that knowledge of matters of conduct can never be free of certain kinds of inexactness.
(9044 views)

Nicomachean Ethics
by Aristotle - George Routledge
Nicomachean Ethics is the name given to the well-known work by Aristotle on virtue and moral character. It plays a prominent role in defining Aristotelian ethics. It consists of ten books based on notes said to be from his lectures at the Lyceum.
(9320 views)

Fundamental Principles of the Metaphysic of Morals
by Immanuel Kant
How should human beings behave toward one another? How must we behave? One of the most influential thinkers of the Western civilization, Immanuel Kant elaborates upon and defends his understanding of the logical underpinnings of all human morality.
(12136 views)