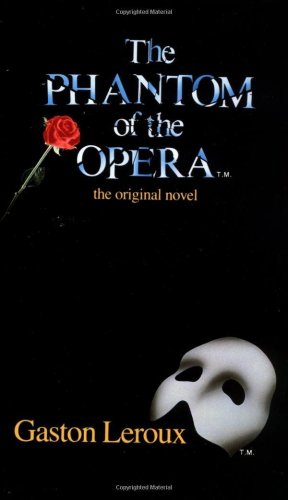 The Phantom of the Opera
by Gaston Leroux

Description:
The Phantom of the Opera is the most famous work of French author Gaston Leroux. Far darker than the stories familiar to audiences of today from the phenomenally successful Broadway musical and the early Lon Chaney, Jr. film, Leroux's Fantom is a genuine murderer, and the story, a true Gothic murder/horror tale. Erik, the Phantom of the Opera, terrorizes the Opera Garnier (or Paris Opera House) by a successful multi-year blackmail plot. When new owners take over the Opera, Erik's reign of terror is abruptly curtailed. With this threat to his formerly comfortable living, and his budding, if bizarre relationship with the lovely soprano Christine Daée, coming to a halt, Erik takes drastic and murderous action. More complex, and far darker than the Broadway musical and film, some have criticized Leroux's novel for its deliberate Nineteenth century pace, and its talkiness. Others have found it fascinating and absorbing reading, with depths not to be found in the later, extraordinarily popular adaptations.

Ivory
by Steve Merrifield - Bibliotastic.com
Martin Roberts has made a successful career from painting, but is finding that his creativity is slipping away - stifled by his family life. That is until he is responsible for running a teenage girl down in his car. Miraculously the girl survives.
(7568 views)

Ghost Stories of an Antiquary
by M. R. James - Edward Arnold
The ghost stories of M.R. James are widely considered to be the best supernatural literature ever written. This volume was his first collection of short stories to be published (1904) and is a fine introduction to this chilling, scholarly author.
(9039 views)

When Graveyards Yawn
by G. Wells Taylor - PublishAmerica
A dead lawyer enters the office of Wildclown Investigations and hires the detective to find his killer. Wildclown and his dead sidekick soon find themselves entangled in a battle for control of a secret that offers either hope or doom for humanity.
(10212 views)

The House of the Vampire
by George Sylvester Viereck - The Premier Press
One of the first psychic vampire novels of its time - where the vampire feeds off of more than just blood - The House of the Vampire is an early classic in its genre. This Victorian novel operates in the continuum of life and death.
(8117 views)