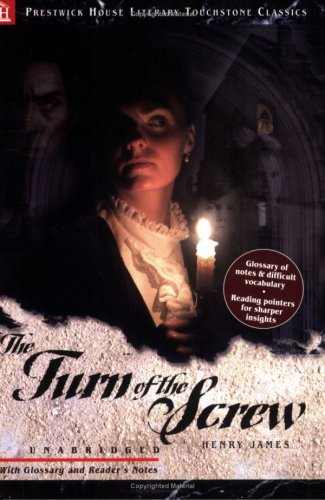 The Turn of the Screw
by Henry James

Description:
Before there was Alfred Hitchcock, there was Henry James, and before Psycho, there was The Turn of the Screw. Why is the young governess the only one who can see the ghosts? Are her young charges haunted or evil? Or is the governess herself mad? The book that claims to start out as a Christmas Eve ghost story quickly becomes a tale of psychological horror as the governess struggles-and ultimately fails-to protect the children from the "corruption" that only she can conceive of...but cannot name. Richly wrought in Late-Victorian prose, Henry James' most famous novel is both hauntingly beautiful and a shocking glimpse into the ultimate source of evil...the human mind.

The Wings of the Dove
by Henry James - Charles Scribner's Sons
A brilliant and sophisticated satire of manners and morals. The Wings of the Dove is an indelible take on the tragic love triangle in which two poor yet ardent lovers seduce a dying woman in the hope that she will leave them her fortune.
(5370 views)

The Tragic Muse
by Henry James - Macmillan and Co.
This wide, cheerful panorama of English life follows the fortunes of two would-be artists: Nick, who vacillates between a political career and his efforts to become a painter, and Miriam, an actress striving for artistic and commercial success.
(6753 views)

The Spoils of Poynton
by Henry James - The Riverside Press
Mrs Gereth is convinced that Fleda Vetch would make the perfect daughter-in-law. Only the dreamy, highly-strung young woman can genuinely appreciate, and perhaps eventually share, Mrs Gereth's passion for her 'things' - the antique treasures...
(4777 views)

An International Episode
by Henry James - Harper & Brothers
In this short novel Henry James plays with a major issue of his personal life and of his time and place generally: the interaction between individuals from England and America around the turn of the 19th into the 20th century.
(6290 views)