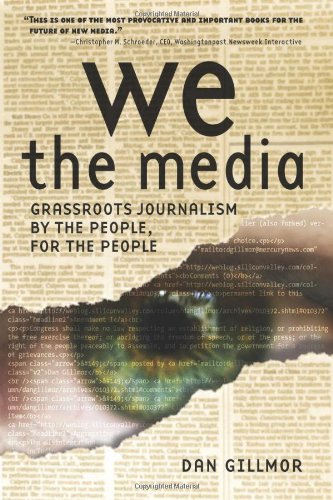 We the Media
by Dan Gillmor

Description:
This book is about journalism's transformation from a 20th century mass-media structure to something profoundly more grassroots and democratic. It's a story, first, of evolutionary change. This is also a story of a modern revolution, however, because technology has given us a communications toolkit that allows anyone to become a journalist at little cost and, in theory, with global reach. Nothing like this has ever been remotely possible before.

Audiovisions : Cinema and Television as Entr'actes in History
by Siegfried Zielinski - Amsterdam University Press
The book reconstructs the genesis of cinema and television as historically relative cultural forms, focussing on the interaction between the apparatus and its uses. It is also a plea for 'staying power' in studies of cultural technology of film.
(3300 views)

The Hyperlinked Society: Questioning Connections in the Digital Age
by Joseph Turow, Lokman Tsui - University of Michigan Press
The book addresses a series of questions about the ways in which hyperlinks organize behavior online. These essays will be valuable to anyone interested in the connections that structure communication discourse in the world of digital media.
(6120 views)