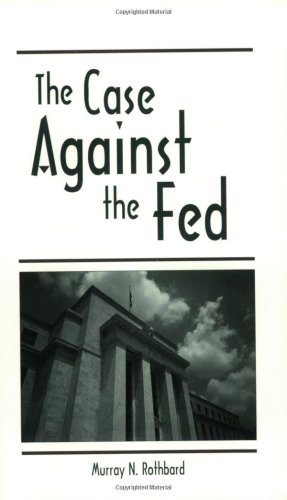 The Case Against the Fed
by Murray N. Rothbard

Description:
The most powerful case against the American central bank ever written. This work begins with a mini-treatment of money and banking theory, and then plunges right in with the real history of the Federal Reserve System. Rothbard covers the struggle between competing elites and how they converged with the Fed.

Money Market: An Introduction
by AP Faure - Bookboon
Money market has traditionally been defined as the market for short-term marketable debt instruments, such as commercial paper and treasury bills. It is more than this. It embraces all short-term lending and borrowing, marketable and non-marketable.
(6793 views)

The Ethics of Money Production
by Jorg Guido Hulsmann - Ludwig von Mises Institute
This pioneering work is the first full study of a critically important issue today: the ethics of money production. The thesis is that a government monopoly on money production and management has no ethical or economic grounding at all.
(10736 views)

The Inflation Crisis, and How to Resolve It
by Henry Hazlitt - Arlington House
The author attempted to analyze thoroughly and in depth nearly a score of major problems raised by inflation and chronic fallacies that are in large part responsible for its continuance. Henry Hazlitt is the author of numerous books in economics.
(17353 views)

Fundamentals of Monetary Policy in the Euro Area
by Dieter Gerdesmeier - Bookboon
This book attempts to inform the reader about the analytical background and institutional setting of euro area monetary policy. The theory and practice of monetary policy are explained in detail and illustrated by a number of real world examples.
(8621 views)