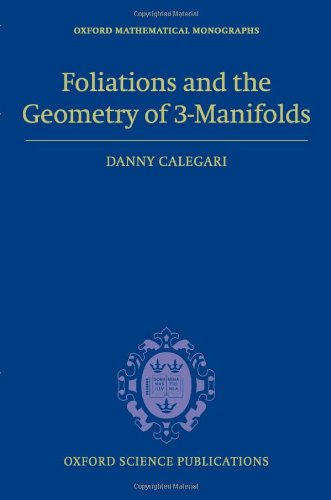 Foliations and the Geometry of 3-manifolds
by Danny Calegari

Description:
The purpose of this book is to give an exposition of the "pseudo-Anosov" theory of foliations of 3-manifolds. This theory generalizes Thurston's theory of surface automorphisms, and reveals an intimate connection between dynamics, geometry and topology in 3 dimensions.

Lectures on Polyhedral Topology
by John R. Stallings - Tata Institute of Fundamental Research
These notes contain: The elementary theory of finite polyhedra in real vector spaces; A theory of 'general position' (approximation of maps), based on 'non-degeneracy'. A theory of 'regular neighbourhoods' in arbitrary polyhedra; etc.
(7928 views)

The Geometry and Topology of Three-Manifolds
by William P Thurston - Mathematical Sciences Research Institute
The text describes the connection between geometry and lowdimensional topology, it is useful to graduate students and mathematicians working in related fields, particularly 3-manifolds and Kleinian groups. Much of the material or technique is new.
(16901 views)

Combinatorial Knot Theory
by Louis H. Kauffman - University of Illinois at Chicago
This book is an introduction to knot theory and to Witten's approach to knot theory via his functional integral. Contents: Topics in combinatorial knot theory; State Models and State Summations; Vassiliev Invariants and Witten's Functional Integral.
(9198 views)

Lower K- and L-theory
by Andrew Ranicki - Cambridge University Press
This is the first treatment of the applications of the lower K- and L-groups to the topology of manifolds such as Euclidean spaces, via Whitehead torsion and the Wall finiteness and surgery obstructions. Only elementary constructions are used.
(8635 views)