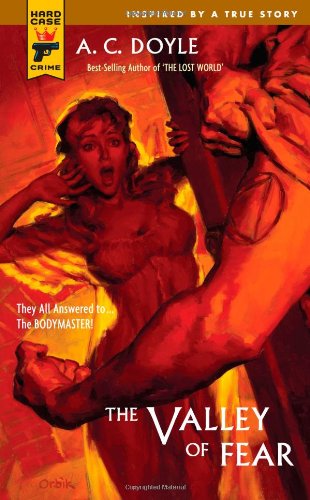 The Valley of Fear
by Arthur Conan Doyle

Description:
Grade 7 Up-A coded warning of imminent danger sends Sherlock Holmes and Dr. Watson to the country house of the reclusive Jack Douglas. When they arrive too late to prevent a tragic death, they must follow bewildering clues and find a murderer.

The Adventures of Sherlock Holmes
by Sir Arthur Conan Doyle - Project Gutenberg
Easy-to-read Sherlock Holmes stories. Numerous mysteries are brought to the house on Baker Street where detective Sherlock Holmes resides. No case is too tricky for the world's most famous sleuth and his incredible powers of deduction.
(16304 views)

Sir Nigel
by Arthur Conan Doyle - W. Briggs
In this epic novel squire Nigel Loring sets out to serve King Edward at the start of the Hundred Years' War. As battles wage between the French and English armies, Nigel attempts to earn his knighthood .. and to win the heart of the woman he loves.
(6025 views)