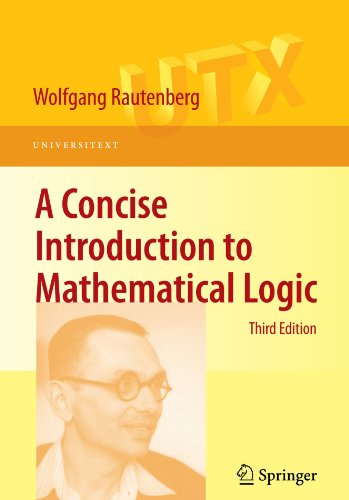 A Concise Introduction to Mathematical Logic
by Wolfgang Rautenberg

Description:
The textbook by Professor Wolfgang Rautenberg is a well-written introduction to the beautiful and coherent subject of mathematical logic. It contains classical material such as logical calculi, beginnings of model theory, and Goedel's incompleteness theorems, as well as some topics motivated by applications, such as a chapter on logic programming.

Logic for Computer Scientists
by Uli Furbach - Wikibooks
This book is intended for computer scientists and it assumes only some basic mathematical notions like relations and orderings. The aim was to create an interactive script where logics can be experienced by interaction and experimentation.
(9288 views)

Natural Topology
by Frank Waaldijk - arXiv
We give a theoretical and applicable framework for dealing with real-world phenomena. Joining pointwise and pointfree notions in BISH, natural topology gives a faithful idea of important concepts and results in intuitionism.
(8180 views)

Predicative Arithmetic
by Edward Nelson - Princeton Univ Pr
The book based on lecture notes of a course given at Princeton University in 1980. From the contents: the impredicativity of induction, the axioms of arithmetic, order, induction by relativization, the bounded least number principle, and more.
(16685 views)