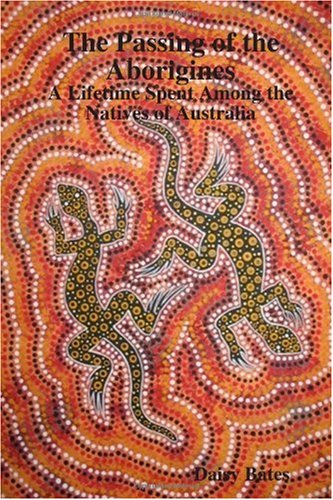 The Passing of the Aborigines
by Daisy Bates

Description:
Bates devoted more than 35 years of her life to studying Aboriginal life, history, culture, rites, beliefs and customs. Living in a tent in small settlements from Western Australia to the edges of the Nullarbor Plain. She researched and wrote millions of words on the subject. She also worked tirelessly for Aboriginal welfare, setting up camps to feed, clothe and nurse the transient population, drawing on her own income and inheritance to meet the needs of the aged.

The Origin of Man and of his Superstitions
by Carveth Read - University Press
In its first part the book explains a hypothesis that the human race has descended from some ape-like stock by a series of changes which began and, until recently, were maintained by the practice of hunting in pack for animal food.
(13604 views)

The Book of Were-Wolves
by S. Baring-Gould
You may rethink your non-belief in werewolves after reading this detailed study by folklorist Sabine Baring-Gould. He takes you on a journey from medieval times to more modern days, examining old folk tales, public records, medical facts, and more.
(2409 views)