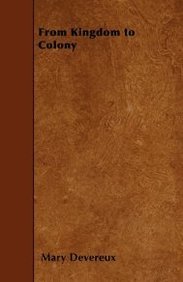 From Kingdom to Colony
by Mary Devereux

Description:
When William, Duke of Normandy, invaded England in 1066, and achieved for himself the title of 'Conqueror', one of those who accompanied him was Robert D'Evreux, younger son of Walter, Earl of Rosmar, feudal owner and ruler of the town of his name in Normandy...

Titanic
by Filson Young - Grant Richards ltd.
The symbols of Honour and Glory and Time that looked so handsome in the Titanic's stairway lie crushed into splinters beneath the tonnage of two thousand fathoms of ocean water. Time is no more for the fifteen hundred souls who perished with them.
(10672 views)

War
by Pierre Loti - J. B. Lippincott Company
One evening a train full of Belgian refugees had just entered the railway station of one of our southern towns. Worn out and dazed, the poor martyrs stepped down slowly, one by one, on to the platform where Frenchmen were waiting to welcome them.
(7530 views)

Lords of the World
by Alfred John Church - Blackie & Son ltd.
The year 146 B.C. was an annus mirabilis in the development of Roman dominion. I have attempted in this story to group some picturesque incidents round the person of a young Greek who struggles in vain to resist the destiny of the conquering race.
(5903 views)

Direct Action: An Historical Novel
by Luke Hauser - GroundWork
More than 7000 people were arrested in nonviolent protests in California in 1980s, developing the art of direct action to a peak not reached again until Seattle in 1999, and in many ways never surpassed. Direct action is more than getting arrested.
(7809 views)