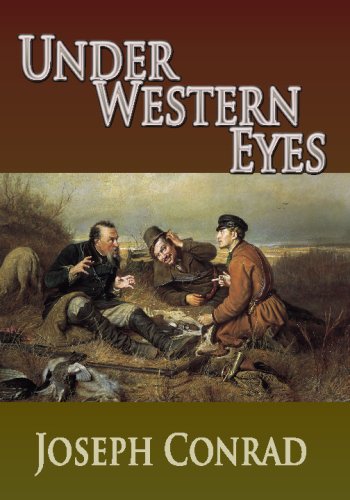 Under Western Eyes
by Joseph Conrad

Description:
A century after its publication, Under Western Eyes is as compelling and as relevant to our own age as it was to an earlier age of political terrorism. The depth of the characters and the moral power of the storyline make this a must read for all.

Nostromo
by Joseph Conrad - New York Harper
Exciting tale of love, politics and revolution, set in a South American country during the 1890s. Nostromo is a monument to futility, it reveals how honor, loyalty, and idealism are inadequate defenses against the assault of evil and corruption.
(9561 views)

Victory: An Island Tale
by Joseph Conrad - Methuen & co
Axel Heyst is involved in the operation of a coal company on a remote island. When that fails, he turns his back on humanity until, once again, he is drawn into contact with the world by a girl whom he rescues and bears off to his island retreat.
(8421 views)

An Outcast of the Islands
by Joseph Conrad
Conrad's second novel is a tale of intrigue in an eastern setting. A parable of human frailty, with love and death the major players, this is a story of a man unable to understand others and fated never to possess his own soul.
(6280 views)