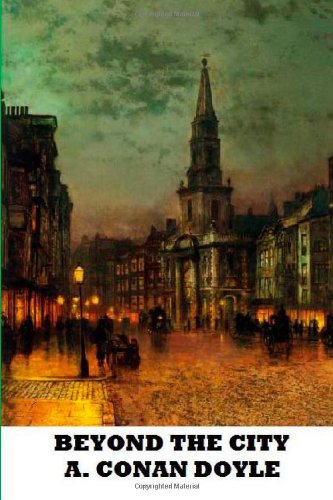 Beyond the City
by Arthur Conan Doyle

Description:
In Beyond the City, the desire for money and romance drives the characters beyond the typical boundaries of their middle class Victorian lives. Lust, deceit, and financial scandals rock their placid world. This is a lightweight social comedy.

Memoirs of Sherlock Holmes
by Sir Arthur Conan Doyle - A. Burt
Sir Arthur Conan Doyle's second story collection about the greatest detective, containing such puzzles as The Greek Interpreter, The Musgrave Ritual, Silver Blaze and The Final Adventure, the struggle between Holmes and the evil Professor Moriarty.
(10951 views)

The Great Shadow
by Arthur Conan Doyle - J. W. Arrowsmith
Set in an English-Scottish border village during the waning days of the Napoleonic era, this adventure story introduces us to Jock Calder, whose quiet way of life is shattered when a mysterious stranger steps ashore near his home ...
(5202 views)

Dealings of Captain Sharkey and Other Tales of Pirates
by Arthur Conan Doyle - Project Gutenberg
When the wars of the Spanish Succession had been brought to an end, the vast number of privateers found their occupation gone. A few of the more reckless hoisted the Jolly Rodger at the mizzen, declaring a private war against the whole human race.
(7872 views)

The Valley of Fear
by Arthur Conan Doyle - Project Gutenberg
Grade 7 Up-A coded warning of imminent danger sends Sherlock Holmes and Dr. Watson to the country house of the reclusive Jack Douglas. When they arrive too late to prevent a tragic death, they must follow bewildering clues and find a murderer.
(7643 views)