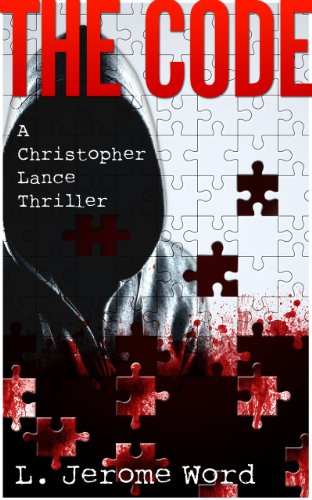 The Code: A Christopher Lance Thriller
by L. Jerome Word

Description:
Solve an unsolvable crime. Break an unbreakable code... A decade ago, Emily Stuart was America's sweetheart until the world class gymnast is murdered in her prime. But that's not all. Emily fell to a serial murderer known as the Code Killer...

Their Own Game
by Duncan James - Smashwords
A top secret plan shifts the war on terrorism from the Middle East to Northern Ireland. Major Bill Clayton and his attractive sergeant Catherine Wilson hunt the killer of Clayton's uncle who was involved with Libyan terrorist weapons suppliers.
(6752 views)

The Brent Street Haunting
by Saul Moon - Smashwords
Bible teacher Evangeline Weekes lodges with the Andrews family at No. 1 Brent Street. When a violent poltergeist invades the property, adolescent chemical worker David Andrews is blamed. But Evangeline is hiding a dark secret ...
(4851 views)

Conspire
by Victoria Rollison - Smashwords
Rookie journalist Alex North usually dismisses conspiracy theories. Soon she finds herself at the heart of what seems to be the mother of all conspiracies. Not only must she prevent a false flag nuclear attack, but also expose who is behind a plot.
(5731 views)

Sons of the City: A Novel
by Scott Flander - Avon
The streets of Philadelphia are meaner than most, the city on the edge is about to explode. The killing of a cop has stoked racial tensions to the boiling point -- as angry police strike out in force, rounding up every young black man in sight.
(14728 views)